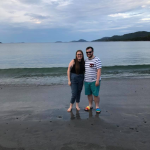 The makers of such fantastic RPGs as the Disgaea series and Ys VIII: Lacrimosa of DANA, Nippon Ichi Software, most commonly known as NIS America, brings you a brand new IP called Destiny Connect: Tick-Tock Travellers. Destiny Connect is a rather simple RPG in comparison to some of the more vast and depth games we see today, but that doesn’t make it any less interesting.

Destiny Connect opens on the game’s protagonist, Sherry, a young girl living just outside of the small town of Clockney. Sherry is watching a movie of young boy travelling through time to fight evil machines while waiting for her dad to get home. Later that night, after getting word that her father won’t be showing up, she heads into town with her mother to enjoy the new year festivities, but when the clock strikes midnight, officially changing into the new millennium–everyone in town aside from her and her mother seemingly freeze.

Sherry, her friend Pegreo, and an unexpected robot companion, Isaac, then go on an advantage through time to save the future. There is a definite Back to the Future theme here as Sherry meets and works with the child version of her parents in the past. Time travel is a very prominent theme throughout the plot but is kept simple. The characters reference the fact that messing with the past can alter the future but aren’t really concerned with it as they spend quite a bit of time with their parent’s past selves. The plot is relatively simple but is captivating enough to keep you engaged regardless of your age and experience with other, deeper RPGs.

The gameplay in Destiny Connect consists of your standard turn-based battles. In the overworld you play as Sherry as you run around engaging into battles with the machines rampaging the town. Battle consists of very basic turn-based mechanics. Your party consists of three characters and for the majority of the game that is Sherry, Pegro, and Isaac. Each has their standard attack and defend commands, and skills. Skills and stats are unlocked as you level and progress through the game and can be upgraded with special items.

Isaac is a little different than the human players, as the majority of his upgrades are made in special shops with the use of ‘gears’. He also has a unique battle mechanic as he unlocks different forms throughout the game. These forms can be switched between freely in battle and have different skills and stat focuses. While one form may be focused on defense, another may be focused on support skills or offense. It adds a bit of depth to his character and plays a part in some pivotal story moments throughout the game. Battling in Destiny Connect isn’t the deepest but it is as fun as any other simple turn-based RPG games like Pokemon or Digimon: Cyber Sleuth. It even uses a similar speed-based turn order system as the Digimon: Cyber Sleuth titles–as shown on the left side of the battle screen.

Enemies and players both have different resistances and weaknesses to the three elements present, Fire, Water, and Electricity. However, aside from Sherry, you don’t get a ton of moves that can exploit these weaknesses. One odd feature added into the battle mechanics is that the player will face an instinct game over if Isaac dies in battle. I don’t know if this was intended as a balance for him as Isaac has moves to be able to block all damage from the other characters at the expense of his own health, but it does seem like an odd choice. In the first half of the game, I only had Isaac die once so I don’t think its a huge issue but it is worth mentioning.

The sound design in Destiny Connect  is really well done despite the lack of voice acting. The menu and battle form sounds are about what you would expect from a game like this as a lot of them are classic sounds you’ve surely come to know and love from an RPG. The game really shines when it comes to its music. The music consistently fits the mood of the town or battle and is enjoyable to listen to. The OST playing when Sherry first leaves her house to run into town had me feeling like I was watching a teen movie at the part where the two main characters run to each other to fall in love. It was always enjoyable to listen to.

The graphics are simultaneously really good and really bad. The art style looks great, it has a very kid friendly, almost PIXAR-like look to the world and characters. Everything is fun, cute, colorful, and well made. The problem is the resolution just seems… low?. Destiny Connect almost looks like you’re playing something on a PS2 and while I don’t think that’s necessarily a bad thing, it does seem odd for a 2019 title.

I played the Switch version of Destiny Connect and it looks better in handheld mode as when its blown up on a television screen, the odd resolution becomes more noticeable. It isn’t bad to the point of looking awful, personally with the chosen art style for the game, I think it doesn’t look that bad at all–it is just a little weird to see. There is a motion blur present when running around the world that I wish could be turned off. It’s just not easy on the eyes and the camera movement overall doesn’t feel very good.

Destiny Connect is clearly made with the intention of being easily accessible to children and personally I think that’s great. There are not a ton of RPGs that kids can easily hop into without being overwhelmed by complex plot or overly difficult battles. Pokemon is the most obvious RPG for kids and in some ways I feel Destiny Connect keeps itself on a similar level of complexity as Pokemon as far as battle mechanics go. I know a lot of us grew up playing RPGs like Final Fantasy when we were kids but it was a different time then and most of us probably didn’t beat or understand those games until we got a bit older. Having an RPG that was made with kids in mind is a great idea and I hope a lot of parents decide to pick this game up for their little ones. Worried you won’t like it as an adult? Don’t. Destiny Connect: Tick-Tock Travellers is a fun RPG for all ages, just manage your expectations for it and you’ll have a great time.

Destiny Connect: Tick-Tock Travellers is available now for PlayStation 4 and Nintendo Switch. This review is based on a Switch copy provided by the publisher for that purpose.