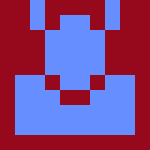 The DS has had a remarkable past 12 months, with titles like Nintendogs, Mario Kart DS and Metroid Pinball leading the handheld to an easy victory over the competition. But the game many have been waiting for has been Metroid Prime: Hunters, Nintendo’s attempt at showing the world that an FPS can be done on an handheld. The big question is, “have they done it, have they shown an FPS can be done right?”. Well, the answer is a resounding “yes,” and while not without a few nits, it’s a solid game that anyone who enjoys some high stakes (and high speed) combat on the DS can enjoy.

Hunters suits players up in the combat armor of galactic bounty hunter Samus Aran, a super-kick-butt girl who carts around a giant hand-cannon. The game is played from a first person perspective, meaning lots of combat and exploration on alien worlds. The single player campaign follows a pretty standard path – pick a planet, land, make your way through various navigational puzzles (lots of jumping on platforms), find the boss, kill him and get back to your ship. Along the way, you have to capture artifacts, Octoliths and other goodies, all while keeping enemy bounty hunters from stealing your Octoliths. There’s nothing more annoying than having an enemy hunter take you out, as he’ll steal an Octolith, of which a complete set is needed to finish the game. This means fighting the bounty hunters again and again to steal back Octoliths, sometimes losing more in the process. Of course, the easy cheat is to make a copy of your save game (there are three slots) before landing on a new planet. If an enemy hunter manages a steal, it’s a simple thing to reload from an earlier copy of the game. Since the levels are pretty small (it’s a DS after all, there’s only so much it can store), it’s not too hard to quickly race back to the point where you fought the last hunter. While this might sound repetitive and tiresome, well, it is repetitive, it’s far from tiresome, as the levels offer some solid puzzle elements (the defense station’s pinball styled level is outstanding), and enemy AI is top notch.

Online multiplayer is probably why 90% of people who bought this game did so. And let me tell you, it’s well worth buying just for the online play. It’s a frenetic and fast paced frag fest reminiscent of the early Unreal Tournament. The maps can be a bit small and dark, but for the most part, they are fantastically fun, even when you’re on the receiving end of a sound beating. Players can choose from any of six hunters to play online, each with a unique special ability, which makes the game all the more fun. Getting online via Nintendo WiFi is a snap, as is finding a game. There were some issues with online play during the first few days of the game’s release, but at this point, the kinks seem to be worked out, and so it’s cake-simple to jump into (or set up) a game to try out one of the seven available gameplay modes.

Did I mention that this game is a visual and aural treat? There are few titles out there that can compete with Hunters as far as sound and video, it’s just that good. The framerate remains consistent, even in the most hectic of battles, and the character models, environments and interface elements all exude the polish of a top console game. Add to that the buttery smooth control scheme that’s as accurate as a mouse and keyboard, and you’ve got a total winner.

If you’re on the fence about trying an FPS on a handheld, Hunters will easily bring you over. It’s incredibly entertaining in both single and multiplayer mode, and while it may not be the most original game (and a little frustrating to FPS newbies), it’s still a solid release worth picking up.

Gameplay: 8.5
Amazing multiplayer and some unique single-player elements make it accessible and enjoyable
Graphics:9
Try to find a better looking handheld game right now
Sound: 8
Fantastic simulated surround sound, plug in your headphones and prepare for a treat
Replay: 9
The single player’s a bit short and repetitive, but it changes up depending on how you play, and did we mention online multiplayer?
Overall: 9
Finally, a handheld FPS that doesn’t suck. It may not break new ground, but it’s still great fun.