A Little Game: ‘Far From Noise’ Slow Down and Think 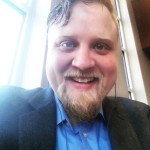 What a week to start my first review for ElectricBento: after traveling home for the holidays, I flew to an academic conference in Tampa, then to an event for my job in Indianapolis, before traveling back to Southern Indiana for a long day of meetings and night class. My mind has been racing like toy cars around a plastic track, until I finally got the chance to sit down with my PS4 and play Far From Noise. While playing the lovely little indie, the clatter in my life washed away like grains of sand taken by the tide.

Far From Noise is described by director George Batchelor as “a game about a conversation in a car on the edge of a cliff.” You play as an unnamed protagonist in the front seat (later revealed to be a female student), who tries not to panic as the car totters on the brink high above a sea of waves crashing against rock. While we call it a game, it may be more accurate to call Far From Noise a nonlinear digital narrative, similar in presentation to the criminally under-noticed Three Fourths Home. The primary interaction the player has with the game is choosing the branching dialogue options, varying between one and three choices throughout the story. At times the protagonist would pause out of fear or frustration in the face of impending death, and I would tap all the controls trying to rectify the situation. Alas, nothing would happen, which serves as a stark reminder that sometimes the best way to overcome an obstacle is to wait, be patient, and breathe, breathe, breathe.

Far From Noise is beautiful, sporting a shaded cell style reminiscent of ABZÛ, another title known for evoking emotions of stillness and serenity. As the car wobbles on the fringe, grass and trees blow in the wind and birds fly among the sunrays on the horizon, instilling the notion in the player that life will continue regardless of your fate. While your situation may be dire, the scenery and tone of the game looks like the poet John Keats came back from the dead and became a game programmer. As you cycle through dialogue options—and stages of grief—you hear the subtle sounds of the wind blowing and tide rushing, as well as the minimalist-yet-soaring score of Geoff Lentin.

Halfway through the story our protagonist is approached by an unlikely ally, who helps our hero process the event with philosophical considerations that evoke the teachings of Emerson and Thoreau. As the protagonist expresses fear and dread, the stranger replies: “There are none happiest in this world but those who enjoy freely a vast horizon.” My story ended on a vague yet intellectually-satisfying note, and I am interested to see how the story changes with subsequent playthroughs.

Far From Noise has about a 30-minute runtime, which was perfectly paced and did not overstay its welcome. While longer narrative games like Firewatch, Gone Home, and Virginia have been likened to interactive movies because of their immense plots and characters with rich backstories, it may be more appropriate to think of Far From Noise as an interactive poem or photograph. We are given just a glimpse of a person at a turning point in their life, which serves as a testament to the unexplored possibilities of the gaming medium.

One of my few criticisms of Far From Noise is that my eyes began to strain after reading the screen for about 20 minutes, and while I could have taken a break, the condensed presentation begs the player to finish the story in a single setting. Frugal shoppers will also have to consider whether the low MSRP of $7.99 is worth paying for a game as long as a television episode (though I would implore skeptical buyers to jump). Gamers looking for cheap thrills will likely be bored by the presentation of Far From Noise. However, if you use Batchelor’s narrative to reflect on the life stories you bring with you, you are likely to find the game to be a rich, immersive experience. As a graduate student myself, right smack in the end-of-semester grind, I appreciated the chance to pause and reconsider the mistakes I’ve made and the choices it may take to right the car on my own cliff.

It seems in 2017 there is chaos every time we turn on the television or read the news. Far From Noise is a welcome break from racket and pandemonium, giving players a chance to reconnect with our environment and reposition ourselves as tiny specks in the universe. If nothing else, it reminds us that all the hectic stories in our lives have conclusions, and those conclusions may be within our control.

Far From Noise is available now on PS4 and PC via Steam or directly from the creator himself. This article is based on a PS4 copy provided by the publisher for that purpose.